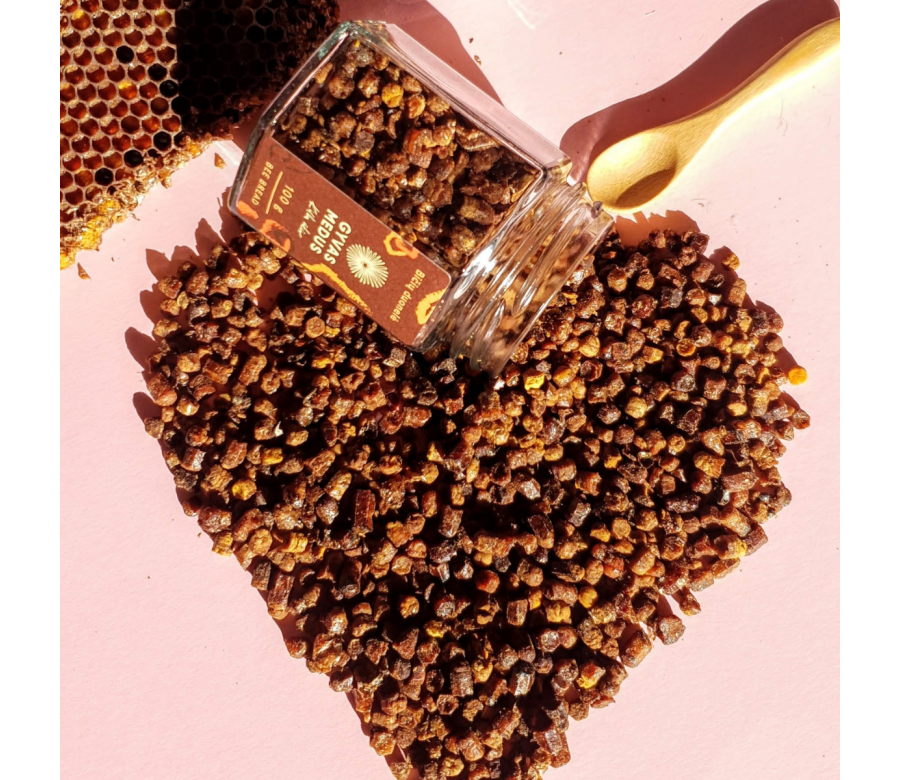 Bee Bread is a fermented mixture of bee pollen, bee saliva (lactic acid bacteria) and honey from inside a beehive.
Bee bread is known under other different names such as perga or ambrosia.Bee Bread has a slightly different composition than bee pollen as the honey bees add honey and bee secretions to the pollen to make a highly nutritious protein source for the hive.

Beebread is a mixture of pollen, honey and enzymes, stored by the bees in the combs. They add wax and seal the comb cells. This mixture undergoes a lactic acid fermentation which is very similar to that in yogurt and other fermented milk products, and after almost 3 months becomes what we call beebread. This fermentation assures the preservation of the product and enriches it in nutrients.

Beebread combs will often be sold as a whole. For that purpose a bee queen separator is placed between brood and honey combs during a period of a maximum pollen gathering activity.
When the combs are full, the pollen is harvested by means of a scraper and filled into a jar.

From all the products of the hive, beebread is the less explored bee product.

How is Bee Bread Harvested?

Honey bee colonies can occasionally produce extra bee bread too. In fact, too much bee bread can apparently interfere with movement between the supers and the brood box.

If this occurs, you can cut out the section of comb, wrap it and freeze it for when your bees may need it. If you want to remove extra honey, place the piece on a queen excluder inside an empty super on top of the hives for a few days so the bees can clean it.

Harvesting bee bread for human consumption, on the other hand, has had a major research paper written on it.

How Nutritious is it?

Even if the primary purpose of fermentation is preservation, bee bread is still a highly nutritious staple of bee colonies. And, surprise, plenty of humans want to reap the benefits too. Supplements are now sold by many health food companies, alongside bee pollen, propolis, royal jelly and honey-based health products.

How to consume it ?

Raw bee bread can be consumed daily in doses over a minimum of 6 weeks. It is suitable for both children and adults, and the usual recommended dose is 1 teaspoon a day, preferably 30 minutes after breakfast.

How to store it ?

Store the bee bread as it is, or in honey (50%) in a dry and cool place where temperatures do not exceed 15-25 degrees Celsius, in sealed containers.

3 other products in the same category: